Freight rates for very large gas carriers have been surging since late last week amid strong shipping demand, long waits to cross the Panama Canal and relatively high arbitrage margins from the U.S. to Asia and Europe.

Those were the highest values for the routes out of the U.S. Gulf Coast since at least May 2019 and the highest for Arab Gulf-Japan since mid-January 2021, according to OPIS records.

The Houston-Chiba rate has soared by 36% from two weeks ago, Houston-Flushing by 38% and Arab Gulf-Japan by 23%.

Until starting their recent climb started Oct. 27, freight rates had been stagnant after previously rising to their highest levels since late spring or early summer.

Prices are expected to continue to rise into December as winter demand picks up, a source told OPIS on Thursday.

Sources have attributed the surge in freight rates to significant delays in crossing the Panama Canal, active lifting in the Middle East after recent holidays in India, slow offloading in India in the aftermath of the holidays, the Far East continuing to draw vessels for prompter dates at increased premiums, robust U.S. exports, and a number of cargoes being offered in the West for December for which no vessels have yet been fixed.

Delays at the canal going north to the Atlantic Basin were 17 days and going south to Asia 22 days, a source said. Bidding for transit slots at the canal has reached $1 million, a relatively high amount of about $20/t for a modern very large gas carrier.

The Energy Information Administration reported Wednesday that propane exports in the week ended Oct. 28 were 1.451 million b/d, up 34% on the year and about on par with the four-week average of 1.471 million b/d.

U.S.-based shipping company Dorian LPG said this week in an earnings report that "subdued" demand for U.S. LPG exports in the third quarter "was due to low petrochemical margins in Europe, continued restrictions in China, and additional Middle Eastern supply of LPG."

Demand has picked up since then and vessels have not yet been procured for a number of cargoes scheduled to be loaded, a source said.

"We heard there are still 10(-plus) H1 December cargoes outstanding and very limited tonnage willing to fix this far ahead," a source said. "There are also at least two end-November outstanding too."

The source added that rates have been driven up because "the East is still drawing tonnage on prompter dates at an increased premiums, the Panama Canal is incurring huge delays, and West cargoes (being sold) so far (are) limiting firm tonnage."

Dorian LPG said in its earnings report that three VLGCs were added to the global fleet in the third quarter and seven more are expected to be added in the fourth quarter.

Freight rates are also partly being pushed up by relatively high notional netbacks, with shipowners trying to take a bigger chunk of potential arbitrage margins, sources have said.

OPIS-calculated notional netbacks to Asia for the prompt half-month loading period have averaged 10.83cts/gal since freight rates started surging on Oct.
27, compared with 7.5cts during the two-week period before that, according to OPIS records.

The strong notional netbacks have helped drive up FOB USGC propane resale values, which in the past two days were pegged at 5.25-7.25cts/gal premium to Mont Belvieu prices for loading on H1 and H2 December.

A source said Wednesday that "the lowest-priced seller is probably (at
+)5.75(cts/gal), the highest in the (+)8s(cts/gal)," with the price
+depending
on factors such as timing, location, and ratio of propane versus butane.

The relatively high offers combined with high freight rates have kept potential buyers on the sidelines, with only two FOB deals reported in the last two weeks. Sources did not know the sales prices and other details of those reported deals.

As water levels along the River Rhine approach a critically low point, freight for barges hauling cargoes into inland European ports has soared to the highest since 2018, according to market sources and operator data.

Water levels at Kaub were forecast to fall to 68 centimeters by July 20, according to data from the German Electronic Waterways Service (ELWIS). The Rhine is a key inland European waterway for barges transporting cargoes, which can include refined oil products and raw materials for petrochemical plants, from ports in the Amsterdam-Rotterdam-Antwerp trading hub to end-users inland.

"We're reaching a critical level," a trading source told OPIS on July 19. "Kaub [a key narrow transit point to destinations inland along the Rhine] is at a critical low point, approaching 70 centimeters. Lowest I had seen years ago was 30-35 cm. Activity stops before that."

Shallow water levels along the Rhine restricts the cargo sizes barges can carry, to avoid the risk of running aground. That results in more barges required to move the same volume, reducing the supply of available vessels. A surcharge is usually levied to compensate for the reduced cargo sizes, although when water levels fall below 80 cm, there is no set figure and is open to agreement between counterparties, according to European logistics network operator Contargo.

Barges typically load between 2,000 and 5,000 metric tons of cargo but by July 19 intakes were limited to just 740 mt, according to Riverlake Barging on July 19. Consequently, barge freight to destinations further inland have rocketed, with rates from Rotterdam to Birsfelden in Switzerland at 100 Swiss Francs ($103)/mt, and from Rotterdam to Karlsruhe in Germany at 70 euros ($72)/mt, both the highest freight rates since December 3, 2018, freight data showed.

German chemicals manufacturer BASF stopped production of toluene diisocyanate at its Ludwigshafen site when Rhine water levels plunged in November 2018. The water levels on the River Rhine, one of the key transport routes into southern Germany, were too shallow for most vessels to navigate, creating supply shortages inland.

BASF told OPIS July 18 it has since implemented measures to make the Ludwigshafen site more resistant to prolonged periods of low water levels and to increase security of supply for production. These measures include chartering more modern ships suitable for low river water levels and using alternative modes of transport.

"Looking at the water levels, we do currently not see any impact on our production," a BASF spokesperson said. "We are monitoring the situation using our digital early warning system and are acting accordingly."

German steelmaker Thyssenkrupp declared a force majeure amid record low water levels on river Rhine in October 2018. Low water levels hindered the delivery of raw materials into its Duisburg plant in Germany. Water levels at Kaub plummeted to just 22 cm on October 22, 2018, according to data supplied by Riverlake Barging.

The number of market participants performing offshore bunkering operations in the U.S. Gulf Coast and Gulf of Mexico further dwindled in 2022.

In February, the vessel headed out of the Gulf Coast after spending nearly the past year working the U.S. Gulf Coast offshore business.

The move comes not as a surprise as OPIS earlier this year reported that Glencore had pared back U.S. bunkering operations’ personnel.

A look at PIERS U.S. Customs data showed the Kirkeholmen tanker loaded marine gasoil cargoes at the Battleground Oil Specialty terminal in Houston throughout last year and into early 2022.

The Kirkeholmen is not the only vessel that has exited the USGC offshore bunkering business.

Late last year, the Bonaire Trader was heard to have gone onto moving cargoes in the Caribbean region rather than performing USGC offshore bunkering.

Gulf Coast Fuel Supply company jumped into the USGC offshore business in mid-2021 with its announcement of using the Bonaire Trader as its bunkering vessel. The tanker loaded its cargoes, such as MGO, at the Texas International terminal in Galveston.

Marine fuel bunker supply business at the Prostar GTI Statia terminal in St. Eustatius are handled through a partnership between GTI Statia and Vitol, which was announced in June 2020.

Since July 2021, Vitol has been using the Morholmen tanker for its first offshore bunkering in the U.S. Gulf Coast and Caribbean supply offerings. The company switched to the Brentholmen in March 2022.

Four other companies that appeared to be in the offshore business include Bunker One, Chevron, John W. Stone and Trafigura.

Bunker One in May 2020 announced using the Furuholmen for offshore bunkering in the U.S. Gulf Coast.

Also, the Furuholmen tanker could be associated with performing offshore bunkering operations in the USGC for other majors and trading companies.

PIERS data shows the tanker was involved with loading cargoes of LSMGO in Houston and Galveston and discharging in the Gulf of Mexico. Ship tracking data indicates the tanker was performing bunkering operations.

Chevron appeared to still be in the offshore business moving at the end of 2021 being associated with the Storholmen tanker, which delivered cargoes out in the Gulf of Mexico. Chevron announced their offshore launch in May 2020.

Ship tracking data indicates that John W. Stone’s Gulf Venture tanker was still performing offshore bunkering outside of Houston. The company entered the offshore bunkering business in October 2020 and business still appears to be brisk for the Gulf Coast-headquartered company.

Trafigura appeared to be associated as shipper with the Brentholmen tanker at the start of the year, according to PIERS data. Trafigura is majority owner of the world marine fuel service TFG Marine with shipping companies Frontline and Golden Ocean.

Over the past year, the Brentholmen tanker loaded HSFO, MGO and VLSFO cargoes at the SemGroup Houston terminal as well as the Texas international Terminal in Galveston.

Other companies that have pulled out of the GOM offshore business include GCC and Minerva, with sources at the time saying there was not enough business. 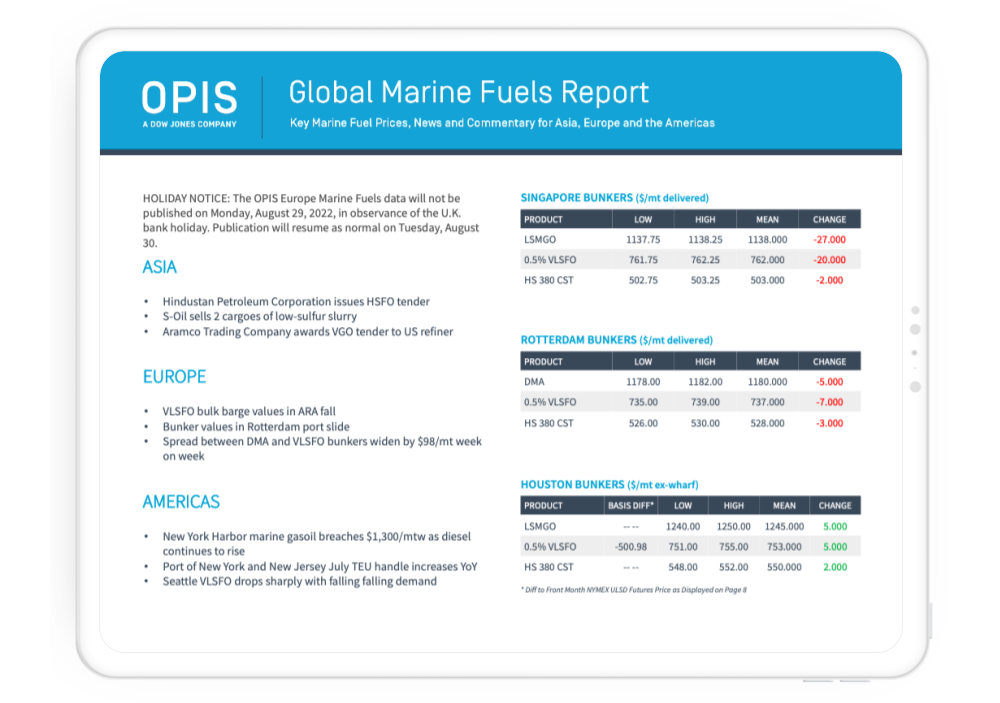 Plus, calculate the energy content of your fuel grade with the BTU Indicator for the most cost-effective fuel purchase. View this sample issue.